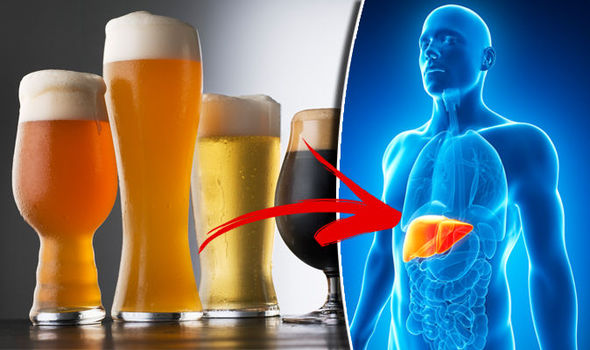 The action of alcohol on the stomach is extremely dangerous that it becomes unable to produce the natural digestive fluid in sufficient quantity and also fails to absorb the food which it may imperfectly digest. A condition marked by the sense of nausea emptiness, prostration and distention will always be faced by an alcoholic. This results in  a loathing for food and is teased with a craving for more drink. Thus there is engendered a permanent disorder which is called dyspepsia. The disastrous forms of confirmed indigestion originate by this practice.
How the liver gets affected.
The organic deteriorations caused by the continued use of alcohol are often of a fatal character. The organ which most frequently undergoes structural changes from alcohol, is the liver. Normally, the liver has the capacity to hold active substances in its cellular parts. In instances of poisoning by various poisonous compounds, we analyse liver as if it were the central depot of the foreign matter. It is practically the same in respect to alcohol. The liver of an alcoholic is never free from the influence of alcohol and it is too often saturated with it. The minute membranous or capsular structure of the liver gets affected, preventing proper dialysis and free secretion. The liver becomes large due to the dilatation of its vessels, the surcharge of fluid matter and the thickening of tissue. This follows contraction of membrane and shrinking of the whole  organ in its cellular parts. Then the lower parts of the alcoholic becomes dropsical owing to the obstruction offered to the returning blood by the veins. The structure of the liver may be charged with fatty cells and undergo what is technically designated 'fatty liver'.
How the Kidneys deteriorate.
The Kidneys also suffer due to the excessive consumption of alcohol. The vessels of Kidneys  lose elasticity and power of contraction. The minute structures in them go through fatty modification. Albumin from the blood easily passes through their membranes. This results in the body losing its power as if it were being run out of blood gradually.
Congestion of the lungs.
Alcohol relaxes the vessels of the lungs easily as they are most exposed to the fluctuations of heat and cold. When subjected to the effects of a rapid variation in atmospheric temperature, they get readily congested. During severe winter seasons, the suddenly fatal congestions of lungs easily affects an alcoholic.
Alcohol weakens the heart.
Consumption of alcohol greatly affects the heart. The quality of the membraneous structures which cover and line the heart changes and are thickened, become cartilaginous or calcareous. Then the valves lose their suppleness and what is termed valvular disorder becomes permanent.  The structure of the the coats of the great blood-vessel leading from the heart share in the same changes of structure so that the vessel loses its  elasticity and its power to feed the heart by the recoil from its distention,  after the heart, by its stroke, has filled it with blood.
Again, the muscular structure of the heart fails owing to degenerative changes in its tissue. The elements of the muscular fibre are replaced by fatty cells or, if not so replaced, are themselves transferred into a modified muscular texture in which the power of contraction is greatly reduced.
Those who suffer from these organic deteriorations of the central and governing organ of the circulation of the blood learn the fact so insidiously, it hardly breaks upon them until the mischief is far advanced. They are conscious of a central failure of power from slight causes such as overexertion, trouble, broken rest or too long abstinence from food. They feel what they call a 'sinking' but they know that wine or some other stimulant will at once relieve the sensation. Thus they seek to relieve it until at last they discover that the remedy fails. The jaded, overworked, faithful heart will bear no more. it has run its course and the governor of the blood-streams broken. The current either overflows into the tissues gradually damming up the courses or under some slight shock or excess of motion ceases wholly at the centre.